Follow our guide on how to maintain a lawn sown by seed. Regular light fertilising during the growing season is better than infrequent, heavy fertilising. Use a correctly balanced fertiliser (such as Yates Lawn Fertiliser). Yates Dynamic Lifter Concentrated Lawn Food is an organic based concentrated lawn fertiliser that provides dual benefits of fast acting nutrients and slow release organics which mean you feed more lawn using less. Yates Dynamic Lifter Organic Lawn Food is an organic fertiliser that gently feeds all lawn types and improves the structure and moisture retention of the soil. Yates Buffalo Pro Controlled Release Fertiliser feeds & greens for 4 months and is ideal for buffalo lawns but suitable for all lawn types.

Never mow grass too low or ‘scalp’ the grass. Grasses need their leaves to make food for the plant and to shade the root system. Remove grass clippings or use a mulching mower.

Some lawns require a large amount of watering so, depending on the situation, other ground covers may be more appropriate.

Water in the morning rather than the evening and give thorough less frequent soakings rather than short, frequent waterings. Don’t allow surface runoff. 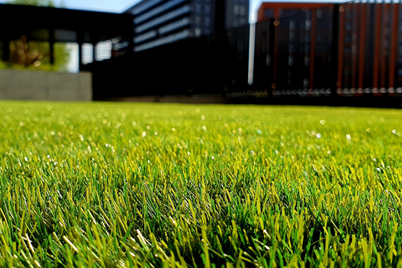