Curl Grubs are the larvae of beetles in the family Scarabaeidae i.e. scarab beetles. This family is one of the largest beetle families in the world, with more than 2,200 species native to Australia. The larvae of various scarab beetles are known by several common names including ‘curl grubs’, ‘white curl grubs’ and ‘cockchafers’.

The African Black Beetle (Heteronychus arator) is an introduced scarab pest, and is one of the ‘curl grubs’ that damages lawns.

The Argentinian Scarab (Cyclocephala signaticollis) is another introduced scarab pest, which became established in Sydney suburbs in the 1940’s but has since spread to Canberra, northeast NSW, and SE Queensland. Recently several specimens have been identified in Adelaide and Melbourne.

Curl Grubs, especially the larvae of African Black Beetle and Argentinian Scarab, can be serious pests of lawns if they become established. Some Curl Grubs may also be pests of other garden plants and potted plants.

The secret to pest control is to keep an eye on your plants, including your lawn, so that you can detect pest incursions early. It pays to know what to look for so check out Symptoms of Curl Grubs including Argentinian Scarab Damage. If you find damage look closer to see if you can find grubs and identify them from the Description below.

Prevention is always better than cure, and you are more likely to be able to achieve that if you are out and about in your garden regularly. There are several things that you can do to prevent serious damage from beetle larvae (see How to Prevent Curl Grubs including Argentinian Scarab Appearing).

Regular monitoring of your lawns will ensure that a major infestation of Curl Grubs including Argentinian Scarab larvae doesn’t appear ‘overnight’. All treatments are way more effective if you can catch an infestation in its early stages.

Well cared-for lawns are more likely to resist, and recover from, beetle larvae attack than neglected ones.

Curl Grubs, including African Black Beetle and Argentinian Scarab, are the larvae of different scarab beetle species. The adults are different in appearance and behaviour, but what they have in common is how their larvae are usually curled up into a ‘C’ shape when we find them. The larvae of these scarab beetle pests are always found underground - you won’t find them climbing in plants feeding on leaves.

It is extremely difficult to differentiate between African Black Beetle larvae and Argentinian Scarab larvae. You need to find the adult beetle stage to identify them.

Argentinian Scarab beetles are soft-bodied beetles about 15 mm long. They are light brownish-beige in colour with distinct, complex, and symmetrical dark brown markings on their backs. Other Curl Grub adults do not have these patterns.

The life cycles of Curl Grubs vary in length from one year to every two or three years depending on the species. Because of these varying generation lengths you may find Curl Grubs in the garden at any time of the year, depending on which species is involved. Female beetles lay eggs in the soil, which hatch and pass through about three moults feeding on plant roots, before pupating in the soil. Adult beetles emerge from the soil and may be drawn to lights at night.

The African Black Beetle has a one-year life-cycle with the most damaging grubs being active in late spring and throughout summer. Adults may be present from late summer and autumn to late spring. Adults overwinter in soil or debris.

The Argentinian Scarab has a one year life cycle. They spend about 10 months underground as larvae or pupae. Research shows that larval feeding occurs during autumn, through winter and into early spring. Adult beetles are active from late November to February, with peak activity in late December.  Beetles fly at dusk and are attracted to lights, especially after rain. 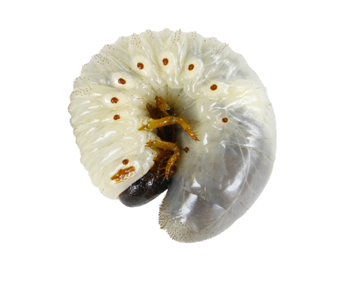 What Plants are Impacted by Curl Grubs & Argentinian Scarabs

Curl Grubs can cause serious damage to turf grasses by nipping off the roots. Larvae of African Black Beetles may also infest the roots of potted ornamentals, or damage a range of garden and edible plants by nibbling on roots. They cause severe damage to root vegetables, especially potatoes, by severing stems and gouging deep holes into tubers.

Argentinian Scarab larvae seem to only damage turf grasses in Australia. Note this pest is known to infest garden plants and potted plants in other countries.