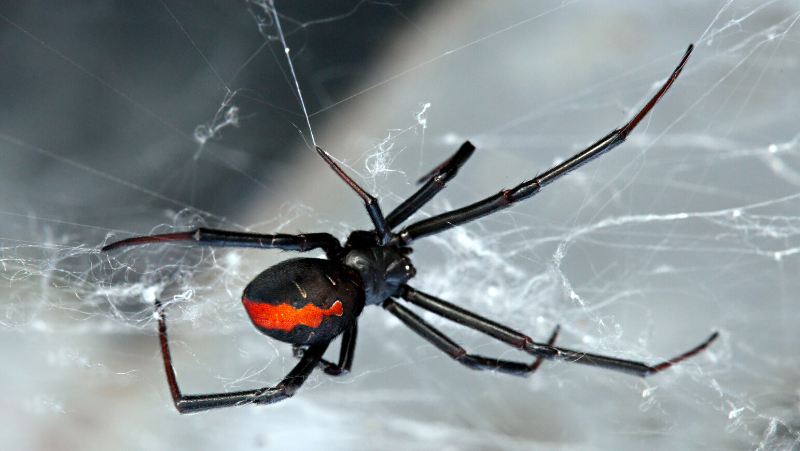 Redback Spiders (Latrodectus hasselti) can be a major cause for concern as venomous bites may cause injury, serious bodily harm and even death. Some people are severely allergic to spider bites and may go into anaphylactic shock, which can be lethal. Given the potential risk to human health, to keep your family and pets safe, it is important to control, prevent and monitor for spiders in and around the home.

To control spiders in the home, spray Yates Long Term Control Barrier Spray. This product is designed to kill on contact and provide a control barrier for up to 12 months indoors and 3 months outdoors. To use indoors, spray surfaces inside cupboards and wardrobes (do not apply to clothing or bed linen), door entrances, window sills, skirting boards, cornices, behind sinks, stoves, refrigerators, and other fixtures, taking care to cover cracks and crevices where insects hide. For outdoor control, spray foundations, air vents, gutters, window frames, and under the house, taking care to cover cracks where insects may hide or enter.

What are Redback Spiders and How to Get Rid of them

Redback Spiders are very small and shiny, females are up to 1 cm in length while males are smaller - up to 3 - 4 mm in length. Females are black and sometimes dark brown, while males are lighter brown. The body consists of a fused head and middle section (thorax), forming the cephalothorax, and a rear section (abdomen).

At the front of the head region are four pairs of simple eyes. At the front and underside of the head are a pair of arm-like appendages (chelicerae) that attach to the fangs. Fangs are used for piercing prey and injecting venom which contains various compounds, including a neurotoxin to immobilise prey. Only females can deliver a venomous bite to humans. Redback Spiders can also spit enzymes on to their prey to aid in their digestion. Further outwards from the chelicerae are a pair of small antennae-like appendages (pedipalps) used for holding and helping to manoeuvre prey while feeding. On the underside of the cephalothorax are four pairs of long thin legs. As with all other spiders, Redback Spiders do not have antennae and are wingless.

The rear section (abdomen) is soft and rounded. The female abdomen is bulbous and rounded like a pea, whereas the male abdomen is more elongated. Females have a distinct orange-to-red and hourglass-shaped stripe starting from the middle and upper rear section (abdomen) along toward the tip and underside of the abdomen. Males have white markings with less distinct red markings.

At the tip of the abdomen are a pair of short appendages (spinnerets) which are used to produce silk. Silk is manufactured inside the abdomen from specialised silk glands. Silk is a sticky, strong and flexible substance that is used for various functions including building cocoons, nests, webs for catching and wrapping their prey. Redback Spider webs can be up to 50 cm in diameter in a haphazard, funnel-shaped and tangled design which is often connected to the ground. Webs are used as a trap to capture unsuspecting prey that walk or fly into it. Once the trap has been set off through vibrations, the Redback Spider quickly descends and wraps the prey in silken threads for later consumption.

Mating primarily occurs in summer. After mating, the female Redback Spider spins a cocoon-egg-sac in which the fertilised eggs are placed. Females can lay up to 2500 eggs in her 2 to 3 year lifetime. Eggs sacs are round, yellow-to-white, aging to brown and contain 250 eggs. Eggs are laid in webs in a warm and sheltered position. After 2 to 4 weeks, eggs hatch and juvenile spiders (spiderlings) emerge.

Spiderlings are similar in appearance to adults, only smaller and sexually immature. Spiderlings disperse and ‘fly’ away using single strands of silk elevated and transported by the wind. Spiderlings grow through many stages, shedding skin (moults) at each stage. At full maturity, adults are ready to mate and reproduce.

Redback Spiders are most active throughout the warmer months, in the early evening and during the night. Widespread throughout Australia, they are very common in urban environments.

They prefer areas that are dry and sheltered such as pot plants, letter-boxes, garden furniture, shoes, vegetable patches, piles of timber and other debris. Generally found outdoors, but may venture into the shed, garage, outdoor toilet, under the house, dog kennel or other undisturbed areas.

Redback Spiders mostly feed on insects, particularly ground-dwelling insects, other spiders and sometimes small lizards, snakes and mice. They are also known to steal prey from other webs. They can survive up to 100 days without feeding.

The severity of a Redback Spider bite varies and is highly dependent on the Redback Spider’s sex, life-history and intensity of bite; and depends on the patient’s age, health status and susceptibility. Symptoms develop slowly over a period of days and may include:

How to Prevent Redback Spiders Appearing

Prevent Spiders from entering the home

Reduce the environment favourable to Spiders

How to avoid being bitten by a spider