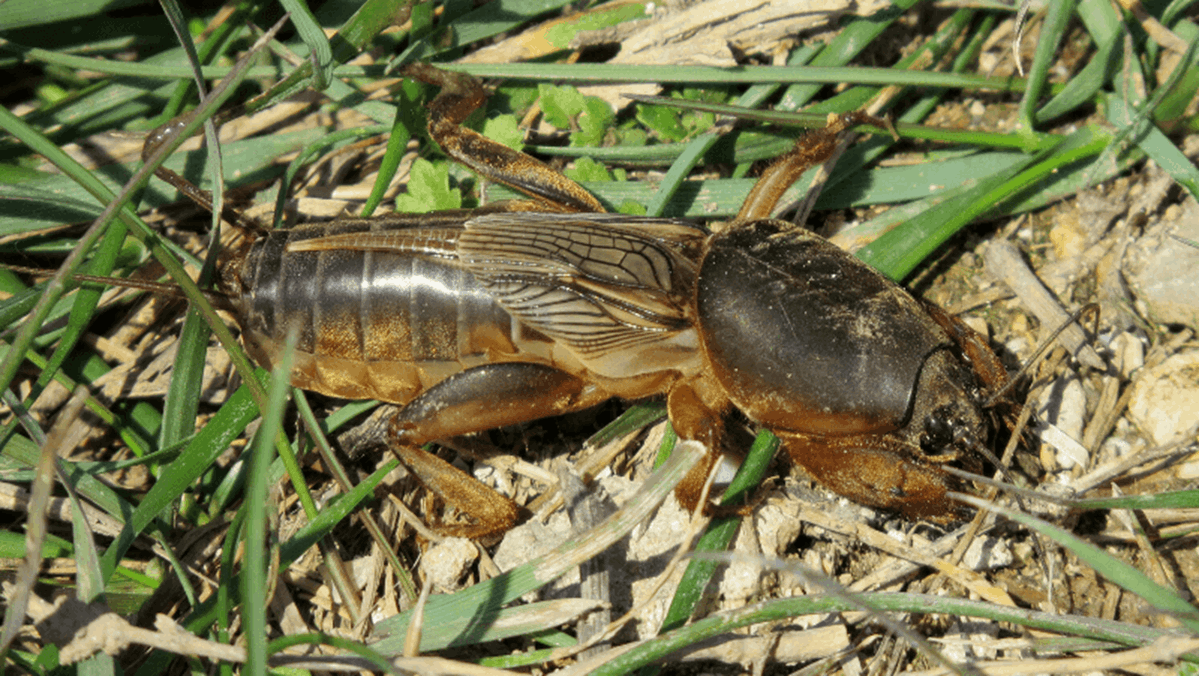 There are hundreds of species of insects from several different families within the order Orthoptera that are called crickets. The most common species that may cause problems in Australian gardens are Mole Crickets from the family Gryllotalpidae, and Black Field Crickets from the true cricket family Gryllidae.

Crickets are well-known for their nocturnal habits, including the night-time singing of male crickets. The problem with insects that are active at night is that it is difficult to be sure of the culprit when you find damaged plants or lawns in the morning. Some nocturnal detective work may be in order to identify what insect is damaging your plants or lawn.

The secret to pest control is to keep an eye on your plants, including your lawn, so that you can detect pest incursions early. Any control method you use is always going to be more effective if you detect pests early, therefore, when their numbers are low.

You need to be out and about in your garden when the insects in question are active. In the case of crickets of course, that means at night. Mole crickets might be encountered while digging in the garden during the day - you can identify them from the Description below – but it is more efficient to listen or look for them at night.

A head torch makes the task easier, and also leaves your hands free to squash any crickets you find on your night patrols. If you find squashing them a bit off-putting you could drop the crickets into a bucket of soapy water, where they will drown.

Prevention is always better than cure. There are several other things that you can do to prevent serious damage from Mole Crickets or Black Field Crickets damaging your lawn or garden plants (see How to Prevent Crickets Appearing).

If treatment for mole crickets in lawns is required, use Yates Baythroid Advanced Insect Killer for Lawns. Use the product as directed, reapplying if necessary.

What are Crickets &
How to Get Rid of Them

Mole Crickets (Gryllotalpa spp.) are common burrowing insects found in most parts of Australia. Around Sydney and the New South Wales Central Coast, they are often the most commonly found crickets. Each Mole Cricket digs a permanent vertical burrow to live in as well as lateral burrows closer to the surface for feeding. Male moles crickets sit in the entrance of their burrows to sing for a mate (especially after rain or garden watering). Their sound is amplified by the shape of their burrows.

Black Field Crickets (Teleogryllus commodus) are plant feeders related to grasshoppers, locusts and katydids, and are known in agriculture as serious pasture pests. They are common in suburban gardens across most of the southern half of Australia. In the northern half of Australia, a similar species, Teleogryllus oceanicus, occurs. Adults and nymphs usually shelter during the day. In hot weather they may hide in cracks in the ground, particularly cracks in lawns, or they may be found under litter, rocks or logs. They emerge at night to feed, and may swarm to lights at night.

Mole Crickets are usually brown in colour and the adults are about 40–50mm long, with very powerful front legs for digging burrows. Adult Mole Crickets have wings and fly during mating season when they may be attracted to lights at night. Mole Crickets bear a superficial resemblance to the famous ‘sandgropers’ of Western Australia that are wingless subterranean crickets in a separate family (Cylindrachetidae).

Female Mole Crickets lay eggs within their own burrows and guard them until they hatch. Mole cricket nymphs resemble small adults but lack wings. Nymphs develop through several moults and develop wings with the final moult. During summer, Mole Crickets migrate to moist patches or dig deep underground. There is only one generation per year. Mole Crickets are rarely seen during the daytime.

Female Black Field Crickets lay their eggs in damp soil in autumn, either singly or in groups. The nymphs, upon hatching in spring, look like small adults without wings. They grow through several stages, developing wings during the last couple of moults. Adults are usually present during summer and autumn until cold and wet weather kills them off. There are 2 to 3 generations over the warmer months. Black Field Crickets survive the cold weather of winter as eggs in soil. What Plants are Impacted by Crickets

How to Prevent Crickets Appearing

Make sure black beetles don't take over your garden. Learn how to control them and other pests with the expert advice and guidance from the gardening team at Yates.