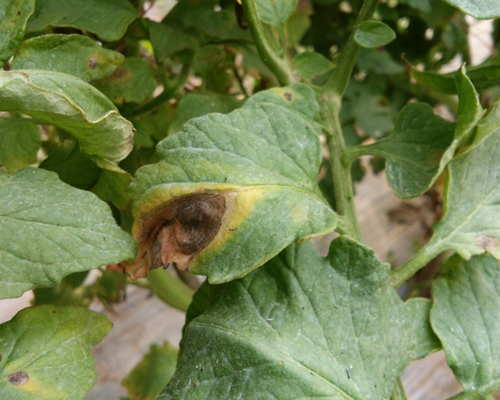 Blight refers to a type of plant disease caused by fungal or bacterial pathogens. These pathogens cause cell death or necrosis, and when large areas on plants have been quickly killed, the disease is described as blight.

Early blight, also known as target spot, is a common disease of tomatoes and potatoes. The fungus can infect the leaves, stems and fruit of tomatoes and may explain why your tomatoes are dying. In Australia, the leaves and stems of the potatoes are usually affected; while the tubers are not normally damaged, the disease can severely impact yield.

How to protect your plants from Early Blight

The disease can be difficult to treat once established, but as soon as symptoms are noticed, apply a protective fungicide to prevent it from spreading. Destroy plants after harvest as the disease can spread to seeds.

Early blight often occurs during humid weather and is most likely to attack plants under stress. Remove dead or damaged leaves and make sure there’s good air movement around the plant. Fungal pathogens can persist on old material in the soil or on other ‘host’ plants, like nearby weeds, for up to a year. Remove diseased plants and bin or burn them.

Practice crop rotation and ensure potatoes and tomatoes plantings never follow. Choose a different spot each year (avoid planting in the same part of the garden for at least four years). If you don’t have enough space for this, consider growing tomatoes in pots and potatoes in grow bags. Look for disease-free seeds and only save seed from disease-free plants. Water the soil and feed plants regularly to keep them growing well – healthy plants can better resist pests and diseases.

Recommended products to use on Tomatoes & Potatoes

Recommended products to use on Capsicums

Recommended products to use on Eggplants Late blight, also known as Irish blight, is the infamous fungal disease that devastated Irish potato crops in the mid-19th century. It led to the ‘Great Famine’, where over one million people died due to starvation. Most of Ireland relied heavily on a single potato variety to feed the country, and ultimately it was their demise. The lack of genetic variation in their agricultural crops contributed to the severity of the disease and its impact; it serves as a stark reminder not to solely rely on monoculture or planting a single plant variety.

On potatoes, distinctive large brown blotches can be seen on stems and leaves, typically at the leaf margin. The lesions rapidly grow and can cause the entire leaf to die. In humid conditions, downy fungal growth can be seen on the undersides of leaves or around the infected area(s). If left untreated, the blotches will continue to amass and can kill the plant in a matter of days. Infected tubers develop purple to black sunken areas on the surface, eventually rotting and spoiling the entire tuber.

How to protect your plants from Early Blight

Ensure you only plant disease-free tubers and look for disease-resistant cultivars.

Late blight favours cool wet weather. The leaves must be wet for at least 8 hours for infection to occur. To prevent infection, avoid over-head watering and regularly inspect plants, especially when conditions are favourable. Fungal pathogens can also persist on old plant material in the soil and on nearby host plants and weeds. Remove diseased plants and bin them.

Apply a fungicide as soon as the disease is noticed and repeat, particularly if conditions are favourable.

Recommended products to use on Tomatoes

Recommended products to use on Potatoes

Leaf blight, also known as botrytis blight, attacks a wide variety of ornamental plants. This fungal pathogen can infect the stem, leaves, flowers and underground storage organs (tubers, corms, bulbs) causing them to suddenly yellow and brown, and eventually rot and die. Botrytis gladiolorum specifically targets gladioli while other botrytis species are non-specific and will attack a range of plants.

Leaf lesions are small reddish-brown with centres that eventually go grey or brown. As the blotches enlarge, they become more irregularly shaped with a brown centre and dark brown border. In humid weather, the spots may be covered with downy grey spores. On flowers, small water-soaked leaf spots appear on petals and eventually become slimy with masses of grey spores.

Corms and tubers can become infected when digging them up for storage. The spores germinate and grow through the corm or tuber, rot ensues and once it has fully set in, the corm or tuber eventually shrivels up.

How to protect your plants from Leaf blight

Any diseased parts should be removed and destroyed. Spray regularly with a suitable fungicide. This disease favours cool conditions with rain, so follow up sprays will be necessary if conditions are favourable. Lift and store unaffected corms or tubers in a well-ventilated dry spot. Practice crop rotation and do not plant in the same spot for at least 2-3 years.

Common blight is a common disease of beans. The bacteria can affect the foliage, stems, pods and seeds of a variety of beans, including French beans, runner beans, peas and mung bean. It is one of the most common diseases (along with halo blight) as the bacteria easily enters the plant via mechanical wounds caused by weather conditions, insects and humans.

Small angular water-soaked spots appear on the leaves. The spots grow and coalesce to form large brown spots of dead tissue, surrounded by a yellow border (not to be confused with halo blight, which has large pale-yellow borders). They can appear along leaf margins and between veins and if left untreated, leaves wither, become crispy and can drop or remain on the plant. On pods, the lesions are circular, water-soaked and dark green, eventually aging to a dark red-brown. In favourable conditions (high humidity), the blotches are covered with bacterial ooze.

How to protect your plants from Common blight

The bacteria can survive inside the seed, so destroy any infected pods and only use disease-free or disease-resistant seeds and planting material. Like other pathogens, it can survive on diseased plant material and on volunteer hosts. However, those plants may not necessarily show symptoms. Look for signs of the disease and destroy any affected material.

The bacteria can also enter through wounds caused by natural openings, weather conditions (e.g. strong winds and hail), insects and mechanical damage. Regularly check plants for signs or symptoms, especially when conditions are warm and humidity is high. Avoid over-head watering and spray plants at the first sign of infection. Repeat sprays may be required, especially if conditions are favourable.

Halo blight is a serious disease of beans. This bacterial pathogen causes plants to yellow, be stunted, wilt and eventually die. The bacteria can be introduced by planting infected or diseased seed, but the pathogen can also attack plants through natural openings, such as the stomates or wounds caused by weather conditions, insects and humans.

Small angular water-soaked lesions with wide greenish-yellow halos appear on the leaves. However, a different strain of the bacteria can also cause the same blotches but without halos. In cool windy conditions, bacterial ooze can be seen oozing from the infection site. These blotches can amass on leaves, causing foliage to wilt and ultimately, result in plant death. Infected pods are covered with greasy water-soaked spots.

How to protect your plants from Halo blight

Remove diseased plant material and volunteer host plants, including weeds. Practice crop rotation – do not plant beans or legumes in the infected soil for at least 2 years. When planting, ensure you only use disease-free seeds or planting material.

The bacteria can also enter through wounds caused by natural openings, so regularly check plants for signs or symptoms, especially when conditions are cool and windy. Avoid over-head watering and spray plants at the first sign of infection. Repeat sprays may be required, especially if conditions are favourable.

Bacterial blight affects a wide range of plants. Like other bacterial pathogens, it can infect plants through natural openings like stomates and wounds. It can also be introduced through planting infected seed. It’s interesting to note that this pathogen can survive on plants without causing any symptoms, until the conditions are favourable (high rainfall, strong winds and low temperatures). Once it develops, it can spread quite rapidly.

This disease is more common on broadscale agriculture crops than in the home garden, however, it’s still a good idea to regularly check plants and treat if observed.

Small, dark green, water-soaked lesions appear on leaves. The lesions may enlarge and accumulate but are limited by leaf veins, so they develop into a characteristic fan shape. Under high humidity, bacterial ooze may be visible in the lesions. As they age, the blotches turn yellow and later become dry, brown and papery. The petioles (stems that attach the leaf to the main stalk) are water-soaked and greasy. Spots on pea pods are sunken, water-soaked and olive brown.

How to protect your plants from Bacterial blight

Blight is most severe in wet and windy conditions. Remove and destroy affected plant material and do not save seed from diseased pods. The disease can easily spread through natural openings, so check plants regularly, especially after periods of excessive rainfall, high winds and low temperatures and treat at first sign of infection with a suitable spray. Practice crop rotation and do not plant in the same spot or area for at least 3 years.

* Yates Liquid Copper is only registered to control blight on peas.