The Scarab Beetle family (Scarabaeidae) is one of the largest beetle families in the world, with more than 2,200 species native to Australia. The larvae of various Scarab Beetles are known by several common names including ‘curl grubs’, ‘white curl grubs’, ‘C grubs’, and ‘cockchafers’.

The African Black Beetle (Heteronychus arator) and the Argentinian Scarab (Cyclocephala signaticollis) are introduced scarab pests, and their larvae are some of the ‘curl grubs’ that damage lawns.

The secret to pest control is to keep an eye on your plants, including your lawn, so that you can detect pest incursions early. It pays to know what to look for so check out Symptoms of Scarab Beetle Damage. Scarab Beetle larvae are often encountered while digging in the garden - you can identify them from the Description below.

Prevention is always better than cure, and you are more likely to be able to achieve that if you are out and about in your garden regularly. There are several things that you can do to prevent serious damage from Scarab Beetles and their larvae (see How to Prevent Scarab Beetles Appearing). You can also help control the larvae of African Black Beetles and Argentinian Scarabs (and prevent beetles) by using Yates Grub Kill & Protect. This treatment provides up to six months protection against the larvae. Apply in mid-September to help control African Black Beetle larvae or in mid-December to help control Argentinian Scarab larvae.

If you notice Scarab Beetle adults in your lawn, treat the lawn with Yates Baythroid Advanced Insect Killer for Lawns. For effective control, you will need to apply it evenly over the lawn with a watering can or garden sprayer and water in well after application (to the equivalent of 12mm of rain).

Any treatment you try will be much more effective if you can catch an infestation in its early stages. It also pays to be persistent.

What are Scarab Beetles & How to Get Rid of Them

Several groups of beetles are called ‘Christmas Beetles’ - the ones we are describing here are in the Scarab Beetle family (Scarabaeidae). Christmas Beetles are found throughout Australia but the highest concentration of species is in eastern Australia.

Rhinoceros Beetles occur in eastern Australia from North Queensland to the Central Coast of New South Wales. A subspecies occurs in the Northern Territory.

Scarab Beetle larvae generally have distinct ‘C’ shaped pale cream or white bodies, six prominent legs and often have a swollen darker tip to the abdomen. Larvae grow from 15 mm to 60 mm long depending on the species.

The heads of larvae may be black, brown, red or yellow depending on the species. Some ‘cockchafer’ species are named by the colour of larval heads e.g. Redheaded Pasture Cockchafer Adoryphorus couloni, a pest of south-eastern Australia.

Christmas Beetle larvae are ‘C’ shaped, up to about 25 mm long with a brown head, pale cream body and with six prominent legs.

Rhinoceros Beetle larvae are also ‘C’ shaped and grow to about 60 mm long with a dark reddish-brown head, pale cream body and with six prominent legs.

It is extremely difficult to differentiate between most Scarab Beetle larvae. It is best to find the adult beetle for identification.

Adult Christmas Beetles are large attractive shiny beetles up to about 25 mm long. Some species are quite spectacular - for example one species is iridescent green, while another is metallic gold.

Adult Rhinoceros Beetles are large black beetles up to about 60 mm in length (male) and 50 mm (female). Males have two large horns on their head which are slightly forked at the end.

The life cycles of Scarab Beetles, including ‘cockchafers’, vary in length from one year to every two or three years depending on the species. Because of these varying generation lengths you may find Scarab Beetle larvae in the garden at any time of the year, depending on which species is involved.

Female Scarab Beetles lay eggs in the soil, which hatch and pass through about three moults feeding on plant roots and other organic matter, before pupating in the soil. Adult Scarab Beetles emerge from the soil and may be drawn to lights at night.

Christmas Beetles have a life-cycle of one year in warmer areas and two years in cool regions. Females usually lay their eggs directly into soil during spring and early summer. Larvae hatch and feed underground on the roots of grasses for many months. Larvae pupate at a depth of about 250 mm in soil, and adult beetles emerge a few weeks later. Although they are called ‘Christmas’ beetles, the adult beetles may be present any time between November and March depending on the species.

Female Rhinoceros Beetles lay their eggs, up to 50, in decaying organic matter (including compost bins). Larvae hatch from eggs after a few weeks and feed on the decaying matter. Larvae grow through several moults before reaching full size, after which they pupate in a soil cell. Adults emerge a few weeks later and may live for a few months.

What Plants are Impacted by Scarab Beetles

The larvae of several Scarab Beetles can cause damage to turf grasses by nipping off the roots. Larvae of some Scarab Beetles, including species known as ‘cockchafers’, may also infest the roots of potted ornamentals, or damage a range of garden and edible plants by nibbling on roots.

How to Prevent Scarab Beetles Appearing 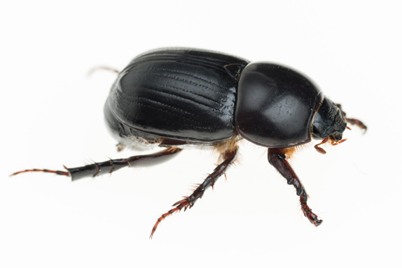