How to Control Gorse

As gorse is a Weed of National Significance, all reasonable efforts must be taken to control the weed. For large stands of Gorse, apply Yates Tree & Blackberry Killer, for small areas apply Yates Zero Ultra Tough Ready to Use. To control gorse, spray plants when they are actively growing, from spring to mid-summer.   Spray foliage and stems thoroughly. Repeat applications may be needed, especially for established thickets. Continue to monitor the area(s) after treatment as there are likely to be gorse seeds germinating, especially if there is any soil disturbance, e.g. cultivation, changes in soil moisture, or fire.

Also known as furze, gorse is an invasive evergreen shrub and a declared Weed of National Significance. It is considered one of the worst weeds in Australia due to its ability to spread, outcompete native vegetation and reduce grazing capacity, all of which have severe economic and environmental impacts.

Native to Europe and parts of the United Kingdom, gorse was introduced to Australia in the early 1800s as a potential ornamental plant or hedge. Its attractive flowers, longevity (up to 30 years) and adaptable characteristics were (and still are) highly revered across Europe, so it made sense at the time to plant it in Australian landscapes. Unfortunately, it favoured the Australian climate and soon spread and became a problematic weed across most of the nation.

This spiny shrub can grow up to 3m tall and 3m wide. Its stems are soft green and furry when young and become brown, woody and covered in numerous spines as they mature. The leaves are dark green narrow and spiny and are all covered in a waxy coating, which helps reduce water loss and allows it to thrive in areas with low rainfall. Bright yellow pea-shaped flowers appear on the ends of stems and between leaves in spring and late summer-autumn and have a distinct coconut fragrance.

Grey-black seed pods appear soon after flowering. They’re 10-20mm long, oblong and covered in fine hairs. Each pod contains 2-6 seeds that are brown, hard, and heart-shaped and are easily distributed by livestock, birds, ants, footwear, and waterways. Each plant can produce thousands of seeds annually and are covered in a water-resistant coating that allows them to remain viable in the soil for 30-50 years. As such, there can be between 10,000-40,000 seeds per square metre of soil. Most seeds fall around the mother plant, but they can also be explosively ejected – up to 5m – from pods during periods of hot dry weather.

This invasive shrub thrives in cool temperate climates and will grow on a wide range of soil types, although it does favour acidic soils. It’s a major weed of pasture areas and can also provide shelter for pests, like rodents, rabbits and foxes. Gorse also increases the risk of bushfires as it’s highly flammable and the dead vegetation provides abundant source of fuel. 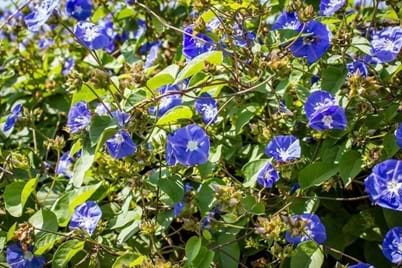 Garden Weeds | How to Kill Weeds in Garden
Previous Next