Cotton Harlequin Bug, also known as Hibiscus Harlequin Bug, is a native member of the jewel bug family Scutelleridae. It is found in northern and eastern Australia as well as parts of Indonesia, New Guinea and some Pacific islands.

It should not be confused with the other Harlequin Bug (Dindymus versicolor) that is from a different bug family – Pyrrhocoridae – and is found in the southeast of Australia. Cotton Harlequin Bug is a minor pest of some garden plants in the family Malvaceae. If the bugs bother, you just pick them off while you are out in the garden watering your plants. For this to work you will need to know what Cotton Harlequin Bugs look like (see Description), and prevent any confusion with other insects.

If you live in an area where Cotton Harlequin Bugs occur, there is nothing you can do to prevent them entering your garden. It is important to know that minor infestations of this bug will not seriously damage your plants, if those plants are well cared for.

If bug numbers increase and treatment is necessary, spray pests with Yates Baythroid Advanced Insect Killer for Gardens. It’s suitable for use on ornamental plants and a small number of vegetables, including broccoli, Brussels sprouts, cabbages, cauliflowers and tomatoes. These bugs exude a defensive liquid when disturbed so it is best to wear gloves and wear safety glasses when spraying.

An alternative approach is to live with them and enjoy their dazzling colours. What are Cotton Harlequin Bugs & How to Get Rid of them

The Cotton Harlequin Bug is a member of the jewel bug family Scutelleridae. What bugs of this family have in common is an enlarged scutellum which forms a shield that completely covers their wings. This gives jewel bugs the rounded armoured appearance of a beetle – consequently they are sometimes misnamed as jewel ‘beetles’.

Adult Cotton Harlequin Bugs are brightly coloured insects up to 15–20mm long with a pronounced convex shape, therefore, humped. Females are larger than males and female colouring is mostly orange with small iridescent blue-green patches of varying size. Males are a mix of metallic green-blue and orange-red.

Colour variation may also occur within a single population.

All life stages of Cotton Harlequin Bugs exude a pungent defensive fluid when threatened. Research has shown that the defensive fluid is an effective deterrent against birds, but not predatory insects such as mantids. The fluid is not as pungent or as staining as the notorious fluid produced by Bronze Orange Bugs.

Cotton Harlequin Bugs develop through a life cycle of gradual metamorphosis – egg, nymphs and adult. Nymphs look like miniature adults but without wings.

Female Cotton Harlequin Bugs lay cylindrical egg clutches that girdle plant stems and leaf petioles. The female bugs then straddle the eggs and guard them. This is an example of maternal care which is quite rare in most insects, but relatively common among jewel bugs and stink bugs.

Nymphs hatch from the eggs and moult through five growth stages (instars), before moulting into the adult form. All life stages may be found on the plant at the same time, and it is quite common to find large aggregations of adults and nymphs together.

What Plants are Impacted by Cotton Harlequin Bugs

Like all plant-feeding bugs in the order Hemiptera, Cotton Harlequin Bugs are sap-suckers. They suck sap from young shoots, and may cause flower buds to drop prematurely.

Aggregations of adults and nymphs may form on tree trunks.

Damage caused by Cotton Harlequin Bugs – even within cotton crops – is usually described as minor. 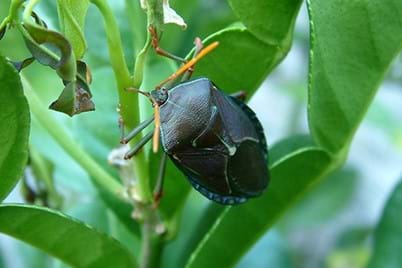 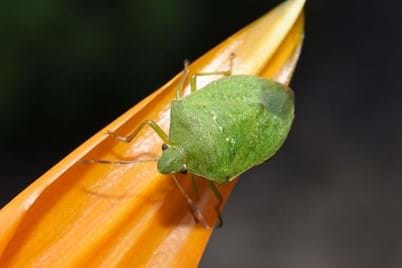 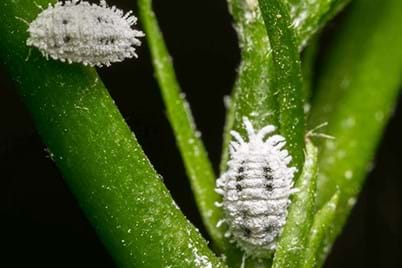 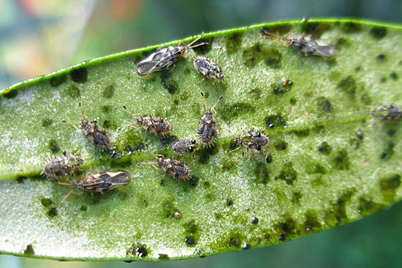